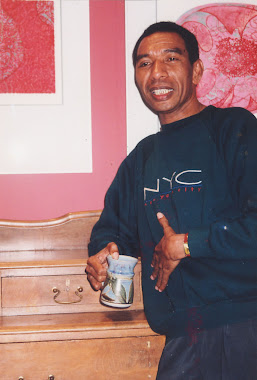 The West Papua Advocacy Team (WPAT) is pleased to announce that it is awarding the 2011 "John Rumbiak Human Rights Defenders Award" to the Honorable Eni F.H. Faleomavaega (D-AS), a member of the U.S. House of Representatives.

Congressmember Faleomavaega has been an articulate and effective advocate for the defense of human rights in West Papua, and has long worked for a peaceful resolution of the serious problems confronting Papuans.

His extensive knowledge regarding West Papua and his manifest sincerity and good will have enabled him to draw on the respect accorded him by his Congressional colleagues and members of successive Administrations to alert them and the U.S. public more broadly to justice, good governance and development concerns in West Papua.

On September 22, 2010, in his capacity as the Chairman of the Foreign Affairs Subcommittee on Asia, the Pacific and the Global Environment, Congressmember Faleomavaega convened the first hearing in the history of the U.S. Congress to include testimony from West Papua's traditional and religious leaders. The hearing, Crimes Against Humanity: When Will Indonesia's Military Be Held Accountable for Deliberate and Systematic Abuses in West Papua, also included testimony from scholars and administration officials from the U.S. Departments of State and Defense.

Driven by a sense of personal responsibility to carry forward the work of his Samoan relatives who are buried in West Papua and in honor of all those who have lived the struggle, Congressmember Faleomavaega continues to do all he can to hold the Indonesian government accountable so that a better way forward may be found for and on behalf of the people of West Papua.

Past recipients of the award--Carmel Budiardjo (UK, 2008); John M. Miller (U.S., 2009), and Andreas Harsono (Indonesia, 2010)—have uploaded video messages to congratulate Congressmember Faleomavaega. The award includes a plaque and a financial prize which the Congressman has directed be donated to a charity selected by him.

Each of the past award recipients has recorded a video message of congratulations to Congressman Faleomavaega:

Posted by Eben Kirksey at 10:14 PM No comments:

The 2009 John Rumbiak Human Rights Defenders Award was presented to the East Timor and Indonesia Action Network and its National Coordinator John M. Miller. ETAN is a leading U.S. NGO working on behalf of human rights in East Timor and Indonesia. In recent years, reacting to the significant deterioration in the human rights environment in West Papua ETAN has been especially active in opposing the U.S. Government's open-ended assistance to the Indonesian military, the TNI, and to the militarized police, BRIMOB, which are the leading human rights abusers in West Papua and the rest of the Indonesian archipelago. ETAN also opposes any restoration of U.S. assistance to the Indonesian Special Forces (KOPASSUS). John M. Miller, has been a key leader in these efforts.
Posted by Eben Kirksey at 9:20 PM No comments:

Email ThisBlogThis!Share to TwitterShare to FacebookShare to Pinterest
Older Posts Home
Subscribe to: Posts (Atom)
The John Rumbiak Human Rights Defenders Award is given annually by the West Papua Advocacy Team. Continuing the legacy of John Rumbiak, a renowned champion of human rights who suffered a debilitating stroke in 2005, this award highlights work done in West Papua, the half of New Guinea under Indonesian rule. His courageous devotion to the cause of human rights defense, the nonviolent assertion of political rights and demands for justice, including accountability for human rights violators, has inspired not only Papuans but individuals and organizations widely in the international community. The award includes a $500 stipend and a plaque which honors the winner. The West Papua Advocacy Team publishes a monthly report.